Jesus' Transfiguration: The Father's Testimony of His Son 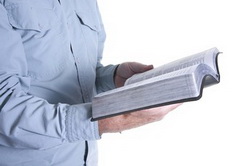 The appearance of Moses and Elijah

On this particular occasion, Jesus went up on a mountain to pray. With Him were Peter, James, and John. These three apostles seem to be the most prominent or frequently mentioned in the accounts of Jesus' life. Several times these three played important roles when others are not mentioned. Cf. Matt. 26:36ff; Mark 5:37 (see also Mark 13:3).

As He prayed, He was "transfigured" (Mark 9:2). This means His countenance or facial appearance was changed. His clothes became white and glistening.

Cf. Ex. 34:29-35 where the skin of Moses' face shone when he had been in the presence of God to receive the law (2 Cor. 3:7-18; cf. Acts 6:15). This was a miracle, which surely proved God was with and working through the one whose appearance was so altered. Perhaps it even symbolized that Jesus would be a law-giver as Moses had been (Heb. 1:1,2).

Moses and Elijah discussed with Jesus about Jesus' coming death in Jerusalem. What was the relationship between Jesus' death and the work of Moses and Elijah? His death ended the force of the laws revealed and taught by these Old Testament prophets (Col. 2:14-17). Note, however, that these men were not antagonistic toward this event, but freely discussed it with Jesus. This shows that Jesus' work was not a contradiction or a violation of what they had done, but rather a fulfillment of it, completely in harmony with God's plan as revealed through the Old Testament prophets.

Note also that we have here one of many references showing that Jesus' death was part of God's will, purposed and understood long before it happened. Moses and Elijah here discussed it with Jesus. Evidently they understood the necessity of it, and did not in any way view such an event as contrary to Old Testament teaching.

However, this does not mean the event here was simply a dream that did not physically occur. When the disciples saw the event, they were "fully awake." Then they saw the glory of Jesus' transfiguration, and they saw Moses and Elijah with Him.

Moses and Elijah, having talked with Jesus, were about to leave. But Peter suggested they made three tabernacles (or dwelling places) -- one for each of these three great teachers.

The accounts says, however, that in saying this Peter did not know what he was saying. Mark adds that he did not know what to answer, "for they were sore afraid." Clearly, what Peter said here is a mistake. Had he fully understand the significance of these events, he would not have said it.

What was his mistake? Note that Moses and Elijah were leaving, but Peter introduced his suggestion by saying, "It is good for us to be here." Likely this means Peter realized some great historic event was occurring. It was wonderful to have these 3 great teachers together. So let Moses and Elijah not leave (as they were about to do). Rather, let them make three places where they can just stay. The prophets would not have to leave, but could stay and people could continue to benefit from their teaching. (Another possibility was that Peter was suggesting three memorials, one to honor each of these men.)

Perhaps Peter is here putting Moses and Elijah on an equal with Jesus -- each one gets a dwelling place. In any case it is clear that he wanted to keep Moses and Elijah here on earth -- don't let them go away, but we will continue to benefit from their teachings. That this is not God's will is shown by God's reaction in answer to Peter's mistake.

Even as Peter was making this statement, God responded to it. A cloud overshadowed them, causing the disciples to fear as they entered into it. Clouds had other times indicated the presence of God (Ex. 13:21,22; 33:9,10).

A voice spoke from this cloud, which was obviously the voice of God the Father, for it referred to Jesus as His Son.

He referred to Jesus as "My beloved Son." Matt. 17:5 adds "in whom I am well pleased." This is what the Father had said from heaven when Jesus was baptized (Matt. 3:17).

Then He said to "hear Him." When the cloud and voice were gone, only Jesus was left present -- i.e., Moses and Elijah were gone. What is the significance of this?

God had caused the change of Jesus' appearance and the presence of Moses and Elijah as a sign that God was speaking through Jesus. This was a miraculous confirmation of Jesus' work. God was speaking through Jesus, just as surely as He had in the past spoken through prophets like Moses and Elijah (Heb. 1:1,2). It was the purpose of all miracles to provide confirmation of a message as being from God (Acts 2:22; Mark 16:20; Heb. 2:3,4; Acts 14:3; etc.). Having seen this, the disciples should never again doubt that, when Jesus spoke, His words were from God. Their later recounting of this event would likewise testify to others of Jesus' approval by God (cf. 2 Peter 1:16-19).

However, Peter went further than God intended; he assumed things that were not what God meant for them to conclude. Peter appeared to be honoring Moses and Elijah equally with Jesus, or at least to want to hold on to the authority of Moses and Elijah as well as that of Jesus. This was not God's intent, so God removed Moses and Elijah, left Jesus only, and emphasized that people should hear Him -- Jesus, not Moses and Elijah.

The mistake made by Peter was repeated by many later Jews, even in the church. They wanted to hold to both Moses and Jesus -- both the Old Testament law and the New Testament law (Gal. 2; 5:1-6; Acts 15). Many people today make the same mistake. They want to bind the New Testament and also parts of the Old Testament. But from the very first time this mistake was made, God corrected it by removing Moses and Elijah and leaving Jesus only.

Use your "back" button to return to the previous page.