Moral Decline and the Faith of Abraham 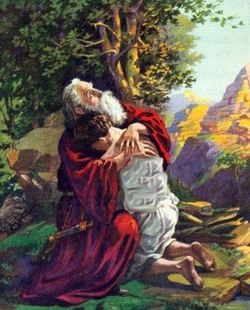 The example of Abraham should teach us to serve God faithfully even in times of serious moral decline.

Hebrews 11:17 - By faith Abraham, when he was tested, offered up Isaac, and he who had received the promises offered up his only begotten son, of whom it was said, "In Isaac your seed shall be called," concluding that God was able to raise him up, even from the dead, from which he also received him in a figurative sense.

Several Scriptures discuss the faith of Abraham and especially his faith in being willing to sacrifice his son Isaac. Hebrews 11 says his faith was so great he believed God could raise Isaac from the dead. Consider some lessons we can learn:

I. God's Faithful Servants at Times Misunderstood His Intentions.

Deuteronomy 29:29 - "The secret things belong to the Lord our God, but the things that are revealed belong to us and to our children forever..." God has revealed everything we need to know in order to do His will and receive eternal life. But there are many things about God's purposes that have not been revealed.

Abraham knew what God commanded him to do, but if Abraham killed his son Isaac, how could God keep His promise to make of Isaac a great nation with many descendants? Abraham concluded God might raise him from the dead, but he was mistaken. Instead just before Abraham killed Isaac, God stopped him and gave a substitute to offer instead.

Job could not understand why he was suffering when he knew he had served God faithfully.

Esther 4:13-16 - When Haman determined to slay all the Jews, Mordecai urged Queen Esther to use her position to appeal to the king to save them. He asked, "Who knows whether you have come to the kingdom for such a time as this?" He did not know what God's plan was, but he did know that Esther must what she could.

Esther replied that if she went to the king, she might be killed. But she said, "If I perish, I perish." She too did not know what the outcome would be, but she determined to use the privileges she had to do what she could to protect her people.

Faithful Bible servants often did not know what God's future plans were. This did not mean they were displeasing to God. Not all ignorance is blameworthy. There are some things we cannot be blamed for not knowing simply because God has not revealed them.

II. Faith Finds Ways to Honor God Instead of Blaming Him.

Many people, who do not understand God's purposes, will criticize, blame, or even deny God on the basis of human wisdom.

Job 42:1-3 - Job had to repent (verse 6) because his misunderstandings of God's purposes had led him to criticize God. God proved to Job that he did not have the wisdom or the power to sit in judgment on God and criticize Him. God is the Creator and Ruler, far wiser than we are. So when He allows things that do not make sense to us, we should still trust Him to do right.

Many people today argue that suffering and other events in life do not make sense to them. Others point out things in the Bible that confuse them. Some claim to find flaws in God's creation. So they sit in judgment on God, and conclude that they do not have to obey the Bible, or even that God does not exist.

Others use human wisdom or extreme hypothetical situations in which it appears that Bible teachings do not make sense. So they deny that people must follow Bible teachings about morality, salvation, the church, etc.

Abraham shows that true faith respects God instead of blaming Him.

Understanding God's instructions to kill Isaac would be extremely hard for Abraham. But instead of blaming God or criticizing Him, he demonstrated great faith by finding a way to honor God despite the difficulties. It turns out his view was mistaken, but at least it harmonized with what had been revealed rather than denying it.

When we find ourselves confused by teachings of Scripture or events in life, we do not always have to correctly understand God's purposes. But whatever conclusions we do reach should always harmonize with what God has revealed and should defend His righteousness and justice, rather than criticizing or denying Him.

III. Faith Trusts and Obeys God Even When It Is Hard to Understand.

Sometimes the things that God allows may result in suffering and hardship for His faithful servants. When we do not understand these things, it is much harder to obey.

Despite the difficulty of God's command, Abraham did not rationalize or excuse disobedience. He did not understand how God would resolve the difficulty, but he trusted God to do what was right so he obeyed anyway.

At God's command, Abraham left Ur when he did not even know where he was going.

At God's command, Noah built an ark to prepare for a flood when such a flood had never been known in the history of the world before or since.

At God's command, Moses led Israel out of Egypt and through the Red Sea..

The Bible is filled with faithful servants of God who faced similar difficulties. Not only did the situations make little sense by human reasoning, they also required great sacrifices and hardships.

When we have true faith in God, like Abraham and all these great Bible characters, we will acknowledge that there may be things about God's purposes that we do not understand. And He may allow us to face hardship and trouble, but rather than criticizing Him we will still trust Him to do what is good and give us great blessings in the end.

In recent years the decline of our nation has become an avalanche of wickedness and immorality. And our government has often approved of this, and even encouraged and supported it. Many of us have observed this with amazement, frustration, sorrow, and even anger. We have prayed, and we have often wondered where it all will end.

What should Christians do and what should we think in troubled times like this? Let us learn the lessons from Abraham.

1. Remember that we do not understand God's intentions. God is not limited by the alternatives that we see. Abraham suggested an alternative, but he was mistaken.

Perhaps God intends to bring severe punishment on this nation for its wickedness. Perhaps He may allow the nation to fall. Who knows? But God has ways of dealing with situations that are beyond our comprehension.

3. And always trust God enough to obey him regardless of the hardships and difficulties we may face. The future may hold suffering for us even as God's people in times past have suffered. Perhaps we may be persecuted for our faith. But however difficult the future becomes, like Abraham we must trust God to know what He is doing and to care for His people.

Daniel 4:30 - The king spoke, saying, "Is not this great Babylon, that I have built for a royal dwelling by my mighty power and for the honor of my majesty?" While the word was still in the king's mouth, a voice fell from heaven: "King Nebuchadnezzar, to you it is spoken: the kingdom has departed from you! And they shall drive you from men, and your dwelling shall be with the beasts of the field. They shall make you eat grass like oxen; and seven times shall pass over you, until you know that the Most High rules in the kingdom of men, and gives it to whomever He chooses." That very hour the word was fulfilled concerning Nebuchadnezzar; he was driven from men and ate grass like oxen; his body was wet with the dew of heaven till his hair had grown like eagles' feathers and his nails like birds' claws. And at the end of the time I, Nebuchadnezzar, lifted my eyes to heaven, and my understanding returned to me; and I blessed the Most High and praised and honored Him who lives forever: For His dominion is an everlasting dominion, And His kingdom is from generation to generation. All the inhabitants of the earth are reputed as nothing; He does according to His will in the army of heaven And among the inhabitants of the earth. No one can restrain His hand Or say to Him, "What have You done?"

2 Peter 2:9 - The Lord knows how to deliver the godly out of temptations and to reserve the unjust under punishment for the day of judgment.