Astronauts and Faith in God and the Bible 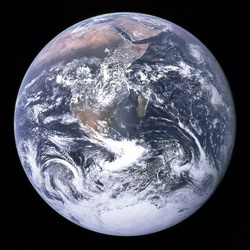 Astronauts demonstrate that, contrary to common belief, many people trained in science still believe in God and the Bible.

John Glenn, who died December 8, 2016, was one of the original seven American astronauts. In 1962, he was the first American to orbit the earth. In 1998 at age 77 he was the oldest person to go into space.

Consider the following excerpts from an article in the Orlando Sentinel, 11/7/1998, entitled "Astronauts' Faith Isn't Lost In Space"

"...From high above Earth, John Glenn saw the face of God. He is not alone. There is something about the beauty of space, Earth and the universe that touches many astronauts' spirits.
Logic-oriented scientists and daring pilots turn spiritual, some even evangelical, after their space flights. Glenn and most of his Mercury astronauts strongly testified about how faith helped with their groundbreaking flights.
The crew of Apollo 8 punctuated the first flight around the moon with a moving reading from Genesis. ... on the moon ... Buzz Aldrin took communion. Apollo astronaut Jim Irwin became an evangelist before his 1991 death.
Astronaut Tammy Jernigan talked about her Christian faith in a live broadcast from a shuttle three years ago. Shannon Lucid, the daughter of missionaries, took a minister's sermons up to the Russian space station Mir...
John Glenn ... summed it all up last week while in orbit.
'To look up out at this kind of creation and not believe in God is to me impossible' ...
An enhanced faith 'is pretty common,' said former astronaut Bryan O'Connor, who used to run the space shuttle program for NASA. 'I can tell you I felt a sense of awe out there looking at the Earth that I never had before, and it's easy to relate that to a spiritual kind of thing...'
...three-time ex-astronaut Mike Mullane ... said Glenn eloquently put his finger on a common belief among astronauts.
'...It is so incredibly beautiful that it does stir your soul into thinking that there does have to be some Supreme Being' ...
Astronaut Dom Gorie ... said he has vivid memories of looking out the window and thinking there is 'no other way it could have formed without a creator.' ..."

It is not our purpose to claim that all astronauts serve God faithfully. But there are some useful lessons to be learned here.

Many Scientists Do Believe in God.

Evolutionists, atheists, and other unbelievers are continually telling us that it is unscientific to believe in God.

College professors and even high school teachers often ridicule believers saying that virtually all scientists believe in evolution, rather than creation. Textbooks, museums, and educational television programs continually advocate views that undermine faith. As a result, many people, especially young people, are led to doubt or even deny their faith.

It is true that those who serve God are always in the minority. The Scriptures warn that those who trust in human wisdom are led to deny Bible teaching.

1 Corinthians 1:20,21,26,29 - God has made foolish the wisdom of this world. The world through wisdom does not know God. Not many wise according to the flesh are called. So no flesh should glory in His presence.

People who place their trust primarily in earthly things - whether wealth or human wisdom - generally do not end up serving God faithfully. They tend to think they can solve their own problems and meet their own needs without God.

Nevertheless, faith in God harmonizes with true science, and many scientific people recognize this.

It is not true science - the true facts of the universe - that leads to unbelief. Rather, people deny God's existence because of preconceived ideas or because they do not want to submit to His rules. Then they use their human wisdom to invent ways to justify ignoring God.

But astronauts are generally well-educated people with a scientific background. Not all of them believe in God, but those who are honest will accept the evidence for God. Throughout history, many of the most effective scientists have believed in God.

Honest Observation of the Universe Leads to True Faith.

Astronauts have a unique opportunity to observe the earth, planets, and other heavenly bodies. These observations lead honest people to realize there is no explanation for what we observe except that it was created by God.

Psalm 19:1 - The heavens declare the glory of God; and the firmament shows His handiwork.

Romans 1:20 - Since the creation of the world His invisible attributes are clearly seen, being understood by the things that are made, even His eternal power and Godhead, so that they are without excuse.

Observation of the things that have been made - specifically observing the heavens - will convince any truly honest person that there is simply no explanation for their existence except that they were created by an all wise, all-powerful God.

Those who do not come to this conclusion are without excuse. As Romans chapter 1 continues to discuss, they reject God because they refuse to have Him in their knowledge. They prefer to live in selfish indulgence, doing as they please.

You and I have a choice. God does not compel us to believe against our will. He gives abundant evidence that He exists, that Jesus is His Son, and that the Bible is truly His revelation. But whether or not we accept that evidence and act upon it is our choice and depends upon our own honesty and humility.

What choice will you make in your service to God? Will you believe in Him and humbly submit to His will? Serving God harmonizes with the true facts of the universe and of the Bible. Will you choose to accept it and obey?

For further study I encourage the reader to go to /instruct/ and  study our online articles about evidences for the existence of God and about creation and evolution.