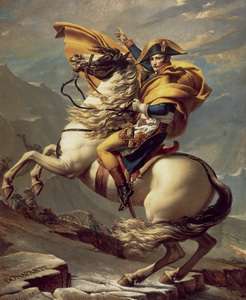 How great were famous people of history? Were their lives really successful? How does God's standard of greatness compare to man's standard?

The world measures greatness by a standard completely different from that which God uses. Consider four men whom the world considers to be among the greatest men who ever lived.*

Considered by many to be the greatest military leader to have ever lived, Alexander conquered essentially every civilized nation in his day. At the end, he wept that there was no one else for him to conquer. He set a city on fire and died in a drunken spree.

To the astonishment of Rome, Hannibal crossed the Alps and put to flight the armies of Rome. His people praised him like a god. But in the end, he fled from his country, hated by the very people who had exalted him. He committed suicide by poisoning himself in a foreign land.

Caesar conquered eight hundred cities and pursued to death the only serious rival he had on earth. But in the end, he was assassinated by those he considered his nearest friends.

Napoleon conquered Europe. The earth trembled at his name. Kings and popes obeyed him. But in the end, he died in lonely banishment where he could sometimes see his country’s flag, yet he was essentially exiled from the world.

Here were four of the most famous men in history. Their names are known to almost everyone. Most people would say they were incredibly successful. Yet one died as a suicide, one was murdered by his friends, one died in lonely exile, and the other died in a drunken spree.

God does not measure greatness by earthly wealth, fame, or power.

Luke 16:15 – For what is highly esteemed among men is an abomination in the sight of God.

Ecclesiastes 2:11 – Solomon said: I looked on all the works that my hands had done and on the labor in which I had toiled; and indeed all was vanity and grasping for the wind. There was no profit under the sun.

Matthew 16:26 – For what profit is it to a man if he gains the whole world, and loses his own soul? Or what will a man give in exchange for his soul?

God’s word reveals the true measure of a successful life.

Matthew 20:25-28 – Jesus said, “You know that the rulers of the Gentiles lord it over them, and those who are great exercise authority over them. Yet it shall not be so among you; but whoever desires to become great among you, let him be your servant.”

Matthew 6: 33 – But seek first the kingdom of God and His righteousness, and all these things shall be added to you.

James 1:12 – Blessed is the man who endures temptation; for when he has been approved, he will receive the crown of life which the Lord has promised to those who love Him.

Christians are rarely considered to be great in the eyes of the world. We may be ridiculed and even persecuted. Yet in the end, every one of us can receive a reward greater than anything achieved by the greatest men of history.

Ecclesiastes 12:13 – Let us hear the conclusion of the whole matter: Fear God and keep His commandments, for this is man's all.

Local churches and individuals may, within limits, distribute this Bible study guide for free, but not for sale. Web sites may link to this page but not reproduce it. Click here for more information about our copyright guidelines.