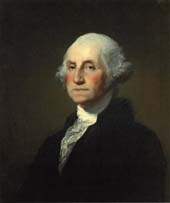 What view did George Washington hold of the relationship between government and the Bible, religion, respect for God, and religious freedom? Did he believe in a "wall of separation between church and state" that removed God and the Bible from education and government?

George Washington served eight years as the first President of the United States. He was the Commander-in-Chief of the Continental Army, and chairman of the Constitutional Convention that composed the Constitution. He is often called the "Father of our country." Surely of all men he would have understood the views of the founding fathers about the relationship between government and the Bible and faith in God.

"When the righteous are in authority, the people rejoice; But when a wicked man rules, the people groan" - Prov. 29:2.

"Righteousness exalts a nation, but sin is a reproach to any people" - Prov. 14:34

"I exhort ... that supplications, prayers, and giving of thanks be made for all men, for kings and all who are in authority, that we may live a quiet and peaceable life in all godliness and reverence." - 1 Timothy 2:2

When a person knows the truth about the views of the founding fathers of this country, who can seriously defend the view that they intended to write the Constitution in such a way as to remove the teachings of the Bible and the praise of God from all governmental and educational institutions?

Please consider carefully the following quotations of Washington's views of Bible teaching and respect for God in our nation.

It would be peculiarly improper to omit in this first official act my fervent supplications to that Almighty Being who rules over the universe, who presides in the councils of nations, and whose providential aids can supply every human defect ... In tendering this homage to the great Author of every public and private good, I assure myself that it expresses your sentiments not less than my own, nor those of my fellow-citizens at large less than either.

No people can be bound to acknowledge and adore the invisible hand which conducts the affairs of men more than the people of the United States. Every step by which they have been advanced to the character of an independent nation seems to have been distinguished by some token of his providential agency.

... we ought to be no less persuaded that the propitious smiles of Heaven can never be expected on a nation that disregards the eternal rules of order and right, which Heaven itself has ordained... (Morris, pp 326-238; Federer, pp 651f; Barton, p114)

The propitious smiles of Heaven can never be expected on a nation that disregards the eternal rules of right and order which Heaven itself has ordained. ... Of all the dispositions and habits which lead to political prosperity, religion and morality are indispensable supports. In vain would that man claim the tribute of patriotism who should labor to subvert these great pillars of human happiness, these firmest props of the duties of men and citizens. ...
...reason and experience both forbid us to expect that national morality can prevail in exclusion of religious principles. It is substantially true that virtue or morality is a necessary spring of popular government." (Morris, pp 634,635, Federer, p661, and Barton, p116f; cf. Wikipedia article on "George Washington and Religion")

"The Continental Congress having ordered Friday, the 17th instant, to be observed as a day of "Fasting, Humiliation, and Prayer, humbly to supplicate the mercy of Almighty God, that it would please him to pardon all our manifold sins and transgressions, ... and finally establish the peace and freedom of America upon a solid and lasting foundation..." (Morris, p343)

In a circular letter to the Governors of the several States in June, 1783, Washington wrote.

"I now make my earnest prayer that God would have you and the States over which you preside in his holy protection; that he would incline the hearts of the citizens to cultivate the spirit of subordination and obedience to government ...; and, finally, that he would be most graciously pleased to dispose us all to do justice, to love mercy, and to demean ourselves with that charity, humility, and pacific temper of mind which were the characteristics of the divine Author of our blessed religion, and without an humble imitation of whose example in these things we can never hope to be a happy nation. (Morris, p360, Federer, p646, and Barton, pp 108f)

Whereas it is the duty of all nations to acknowledge the providence of Almighty God, to obey his will, to be grateful for his benefits, and humbly to implore his protection and favor; ... Now, therefore, I do recommend and assign Thursday, the twenty-sixth day of November next, to be devoted by the people of these States to the service of that great and glorious Being who is the beneficent author of all the good that was, that is, or that will be; that we then may all unite unto him our sincere and humble thanks for his kind care and protection of the people of this country ... And, also, that we may then unite in most humbly offering our prayers and supplications to the great Lord and Ruler of Nations, and beseech him to pardon our national and other transgressions; ... to promote the knowledge and practice of true religion and virtue.... (Morris, pp 329,330, Federer, p654, and Barton, pp 115f; cf. Wikipedia article on "George Washington and Religion")

"'The general most earnestly requires and expects the due observance of those articles of war established for the government of the army which forbid cursing, swearing, and drunkenness, and in like manner he requires and expects of all officers and soldiers, not engaged on actual duties, a punctual attendance on divine service to implore the blessing of Heaven upon the means used for safety and defence.' (Morris, p342, and Federer, p638)

In 1776 Washington also ordered his soldiers:

The general is sorry to be informed that the foolish and wicked practice of profane cursing and swearing, a vice hitherto little known in an American army, is growing into fashion. He hopes the officers will, by example as well as influence, endeavor to check it, and that both they and the men will reflect that we can have little hope of the blessing of Heaven ... if we insult it by our impiety and folly. Added to this, it is a vice so mean and low, without any temptation, that every man of sense and character detests and despises it. (Morris, p344)

In May, 1777, Washington sent to the brigadier-generals of the army the following instructions:

Let vice and immorality of every kind be discouraged as much as possible in your brigade; ... Gaming [gambling] of every kind is expressly forbidden, as being the foundation of evil, and the cause of many a brave and gallant officer's and soldier's ruin. (Morris, p345)

...for attempting to commit sodomy ... [and for] Perjury... [He was sentenced to be dismissed from the service with infamy.] His Excellency the Commander in Chief [George Washington] approves the sentence and with Abhorrence and Detestation of such Infamous Crimes orders [the soldier] to be drummed out of Camp tomorrow morning by all the Drummers and Fifers in the army never to return... (From The Writings of George Washington, published in 1934 by the U.S. Government Printing Office, quoted by Federer, pp 643,644)

In 1789 Washington wrote regarding religious freedom:

If I could have entertained the slightest apprehension that the Constitution framed in the Convention, where I had the honor to preside, might possibly endanger the religious rights of any ecclesiastical society, certainly I should never have placed my signature to it; and, if I could now conceive that the General Government might ever be so administered as to render the liberty of conscience insecure, I beg you will be persuaded that no one would be more zealous than myself to establish effectual barriers against the horrors of spiritual tyranny and every species of religious persecution. For ... I have often expressed my sentiments that every man, conducting himself as a good citizen, and being accountable to God alone for his religious opinions, ought to be protected in worshipping the Deity according to the dictates of his own conscience. (Morris, p559, Federer, p653, and Barton, p112)

Go to the Bible Study Online Library (the Gospel Way)